Anything named the Dead House has to be mysterious, right? I can't find any real reason it is called that but the small brick structure on the old Navy base in North Charleston may be it's most historic structure. I sure do wish they would take off the No Trespassing sign since so many of us show up to take photos. Sheesh.

This information is from the Navy Yard Blog:


The Navy called it the Dead House, and that name “Dead House” appears on an 1895 survey of the area done prior to the design of the Chicora Park on the site by Olmsted Brothers. So the building pre-dates the Navy and Chicora Park. Before that the land was a plantation. Navy Architect Randy Guy’s research identified 15 different landowners from the first land grant in 1672 through 1895. There are many periods of local history when storing powder around the fringe of Charleston would have been called for, but no specific information has yet been found. Of the land owners, one stands out. His name was Sir Edgerton Leigh. He owned the property from 1767-1771. He was the first customs officer and the first postmaster for Charleston. In his customs capacity, it is thought that he assessed a tax on gunpowder carried by arriving ships. How this possible gunpowder connection may tie into the building on the Base is unclear thus far. Graduate student Chris Ohm from the College of Charleston has been researching a number of leads about the building and time will hopefully tell us more of the story.
Mr Hugh’s own theory on the Dead House name is that it stems from the use of the old powder magazine as a temporary place to put bodies until burial was arranged. On the old plantation grounds, this building would have been the coolest place. 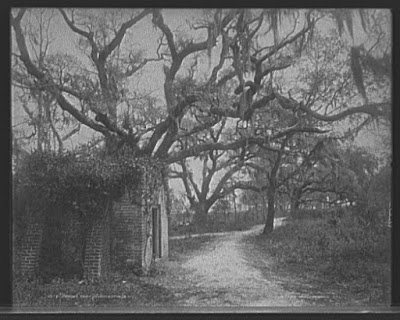 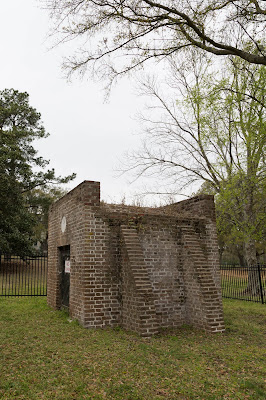 Posted by Charlestonjoan at 8:41 PM

I've seen a few receiving vaults, particularly in New England, where cold weather during the winter made it impractical to bury the dead when the ground was frozen, and this looks much like those. I believe there is a receiving vault in Magnolia Cemetery that has either recently been restored or is in the process of being restored.

Does the Navy use it at all these days?

Very mysterious and creepy,sort of an "Alice Flagg" sort of thing.With those buttresses and no windows I'm thinking powder magazine, but the makeshift morgue story makes sense.Death was a common and familiar event on coastal plantations back then.Can you still get in all the unrestored buildings on base as you could a couple years ago;)

Kevin, You may be thinking about the new family mausoleum(sp) that was just built last year.Joan featured it in any entry about a month ago.

Charlestonjoan said...
This comment has been removed by the author.
8:36 PM

You can still slip into some of them. You can pull up quite a few youtube videos where folks have filmed walk throughs.

There is a receiving tomb at Magnolia Cemetery. I don't think I can slip an image into these comments boxes but this link might work. You are correct, it is being repaired. The current sign blocks decent photos:
https://photos.smugmug.com/Cemeteries/Magnolia-Cemetery-Charleston/i-Dzm9VS8/0/L/IMG_7973-L.jpg

That was a recent mausoleum! Quite impressive for a new cemetery structure.