I came across the Teapot Museum by happy accident and was blown away to realize I just missed the grand opening ceremony earlier this week. I didn't expect to come across a giant blue teapot in a parking lot behind main street shops in tiny Elloree, S.C. and now I see it has already made it onto the Roadside America directory.

I am most upset to have missed soprano Deborah Saverance of the Metropolitan Opera Chorus performing  tea-themed selections at the ribbon cutting ceremony.


ELLOREE — It’s tea time. Julian and Sybil Boland will hold the grand opening of their “tea-rific” museum Saturday, June 9, at the rear of Boland’s Pharmacy on Cleveland Street in Elloree. There, a larger-than-life custom-built teapot will welcome visitors to J’s Tea-rific Teapot Museum.
Julian Boland said the unique 20-foot blue entryway is complete with a spout, handle and lid.
The Bolands have been collecting teapots for at least 20 years. Some of the pots in their collection were purchased by the couple, others were given as gifts, and some have endured long journeys from overseas. Boland said he doesn’t know just how many teapots he and his wife have, but it’s likely in the tens of thousands. He said the teapot museum has been “years in the making,” and credits his wife with arranging, cleaning, collecting and displaying the pots.
Each teapot has a specific place in the museum. For example, Boland hired a carpenter to construct a shelving display in the form of Noah’s ark — and on that display are dozens of teapots depicting the Biblical story.
The ark shelving display is also home to dozens of animal-shaped teapots, keeping in true form the Old Testament story where God instructs Noah and his family to gather two of each animal and place them in an ark to avoid impending flood waters. In the form of teapots, there are dozens of animals aboard the ark. And the museum is flooded with teapots. 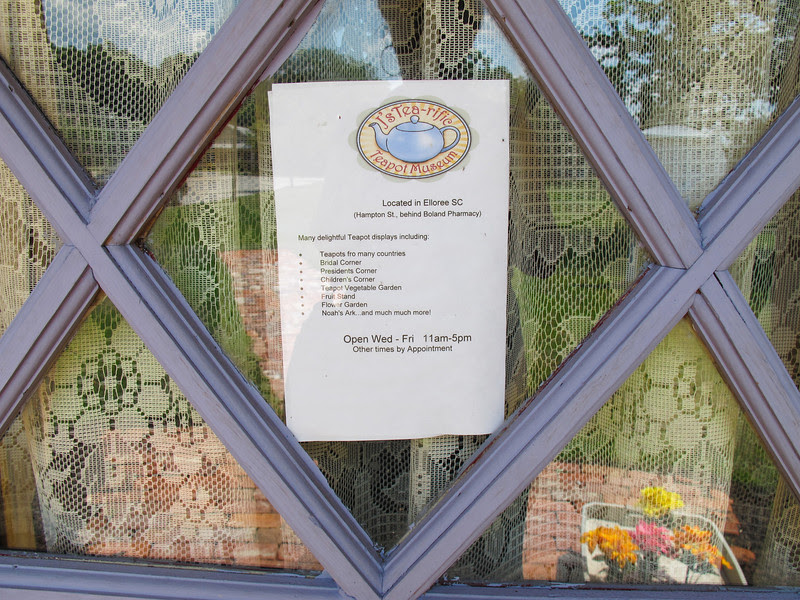 Posted by Charlestonjoan at 6:43 PM

Thanks again for the permissions. http://uniquelytea.blogspot.co.uk/2012/06/js-tea-rific-teapot-museum-elloree.html

"See? I'm not a hoarder, I opened a MUSEUM!" Extremely cute, though, isn't it?

You are welcome! I thought of you immediately :)

Hahah! That is collecting to the extreme. I also know a lady who has the Guinness Book of Records Mug Collection. They have shelves all over their house and garage.

Elloree! The Home I Love! My mama is headed up there today to visit my grandma.

This place looks very interesting! Sometimes I am in the Charleston area for business and have never seen the Teapot Museum. My last visit I actually checked out some very affordable Charleston real estate so hopefully my next visit will be more permanent. I'd love to see the teacups!

Matthew - this little teapot is already in all of the roadside wonders web sites. Elloree is on the map! Now get them to open the Thai Restaurant again. I miss it. :(

The Teapot Museum is not actually in Charleston. It is a little over an hour away.