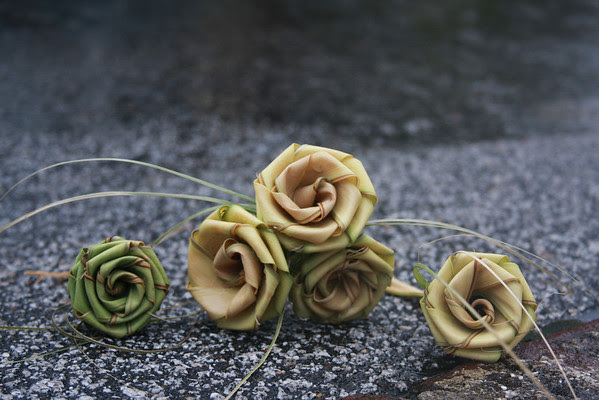 Palmetto Rose Legend: It is said that during the War Between the States Confederate Soldiers went off to war wearing Palmetto Roses woven by their sweethearts in South Carolina.


Tourists can't go far in Charleston's historic district without being approached by young boys offering to sell them a palmetto rose. It became a problem with home owners concerned about boys with knives trespassing on private property to climb palmetto trees to cut the fronds needed to make the roses.

Now-a-days the kids take an after-school entrepreneurship class, learn basic business skills, get a license and run their own business. This summer the Palmetto Artisan Program program won an award at the US Conference of Mayor's city livability awards.

There is so much going on today, it feels like the first weekend packed with holiday related activities but it's drippy, chilly weekend and much more tempting to snuggle up inside.
Posted by Charlestonjoan at 11:14 AM

That is so cool; both the story of the soldiers heading to war and the boys learning to be smart businessmen.

Actually the story of the Palmetto Rose and soildiers is total rubbish to get the tourists to buy them. The roses were brought to Market street in 1995 by a couple of Artists. They showed them to the basket weavers that had been in Market Steet for decades. None of them had seen them before. Then a few others made them for tips. The Civil war story while good is just plain old marketing.

Merchants of Venice Jimmy the rose man.three clips on you tube tells the truth to 7 contenents in 7 languages. And the next.time any one lies on my s.c.state in history again mainly Savannah and
Miami.As founder ofmore than a rose around the world I will personally do more than make all palm folders withmore than a leaf look retarded myself by means of technology.And remember in 1988 the south rose...