The news about the 276,000 pre-orders for Tesla electric cars that haven't even been built yet is a fascinating turn of events, isn't it? Maybe I should order one! It will take long enough to build that many I might even have enough time to save up for it.


Worldwide deposits for the new lower-priced Tesla electric car hit 276,000 over the weekend, surprising even the company's CEO, who says it may force Tesla to open another factory.  CEO Elon Musk posted the number Sunday on his Twitter feed and said if the trend continues, Model 3 orders could hit 500,000 and would require another factory in Europe to meet demand.

When my friend Martha Rose told me the first Tesla charging station had been built in Santee, I had to check it out. Sure enough - there were two Tesla's plugged in behind Clark's restaurant and hotel. I am not sure I had even seen one before. The Model 3 cars will have glass top and come with attractive tax credits. I'll take a blue one please! 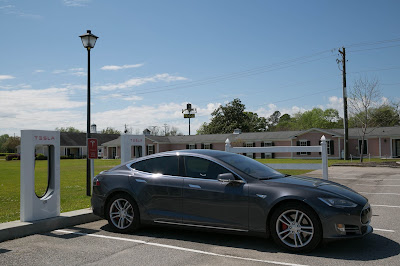 Posted by Charlestonjoan at 6:13 PM

I've seen at least one of these here, but I never seem to see recharging stations. They must be around though.

Would you be able to plug them into your present outlets in your garage. Probably drive up you electric bill.

This is the first one in South Carolina so most must be at the home base. The new cars will range over 200 miles. Still if you were planning a long trip you would need to plot your course carefully.

Owners must have a plug in station. It is all interesting and makes me want to learn more about it.

During a photo walk a few months ago in Georgetown,SC, I parked near a charging station with 1 or 2 (maybe 3?) places to plug in. So, sounds like Tesla needs their own stations?? Have no clue what/who could plug in in Georgetown. Maybe I'll Google it. Haha.