Reclaiming the Home for Nurses

Recognize this? It is the building to the right of Roper Hospital facing Calhoun St. This sign has always interested me. A home for nurses! We need one. Quick. Let's reclaim it. Install a bar, masseuse, a spa and restaurant. It's our house and we want it back. I am always looking for a place for parties and fundraisers.

I found this snippet in an old journal and had to correct their typo of Charlton to Charleston:

The Trained Nurse & Hospital Review: The R. A. Kinloch Home for Nurses has been completed in connection with the Roper Hospital, Charleston, S.C. Before the earthquake funds had been collected and set aside for this purpose, but the earthquake wrought such damage to the hospital property that it was removed to another site. The matter of the home for nurses was dropped for years, though the little fund in the bank kept slowly adding to itself. The present building is complete and well equipped, and is an altogether happy ending to a long delayed project.

Who is our hero, Dr. Kinloch? Dr. Robert Alexander Kinloch was born in Charleston on February 20, 1826. He was graduated from the College of Charleston in 1845 with distinction. After one “course” at the Medical College of the State of South Carolina he took his Medical Degree from the University of Pennsylvania (1848), then spent two years in the hospitals of Paris, London and Edinburgh. Returning home, he began to practice in his native city, but when the War broke out, he entered the Confederate army as a surgeon (July, 1861). During his military career he served at various times upon the staffs of Generals Lee, Pemberton, and Beauregard and was also detailed as a member of the medical examining board at Norfolk, at Richmond, and at Charleston. Subsequently, he held the position of inspector of hospitals for South Carolina, Georgia and Florida.

Upon the close of the War he resumed practice in Charleston and in 1866 was elected to the chair of materia medica in the Medical College of the State of South Carolina. He was First Surgeon at Roper Hospital and also attended in City Hospital, and later in St. Francis Infirmary. 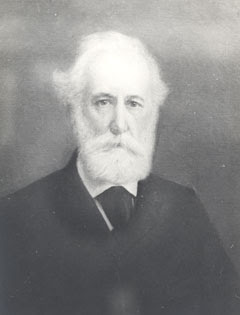 Very impressive, Dr. K. I hope he approves of my plan.
Posted by Charlestonjoan at 9:45 PM

Wow. :) Funny enough, I think he looks like somebody, who would create such a home! Something in his face..