Built by a newly freed enslaved gentleman known as one of the "Black Kings of Edisto" for his wife, this charming home is one I have wanted to see and finally had the chance on Saturday. We couldn't get to close to it but I was delighted to happen upon it as we toured Edisto Island. What a charming home. It is sad to see it in ruins but a happy relief to learn that it will finally be restored.


Post & Courier: EDISTO ISLAND — Not long after the Civil War, some newly freed slaves on this sea island were able to prosper, to the point where they got the nickname "the black kings of Edisto."  Henry  Hutchinson was the son of one of these kings, and Hutchinson's late 19th century home, built next to the island's first black-owned cotton gin, signaled how quickly fortunes were improving for some in the wake of the war.  His two-story home included three dormers and eaves decorated with stylish Victorian detail, while a wraparound porch gave Hutchinson and his wife, Rosa Swinton Hutchinson, a grand view of their field and even of the distant marsh. 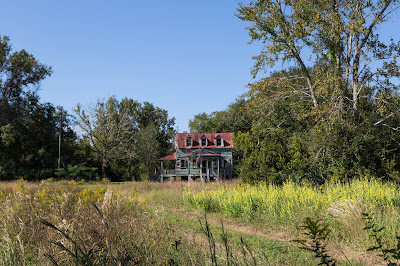 Posted by Charlestonjoan at 5:52 PM