Church Photo in Lieu of Attendance

It has been a rainy and dreary day in the lowcountry but I walked enough yesterday to make up for a lazy day today. Today's church photo in lieu of attendance is the beautiful and often photographed French Huguenot Church at Church and Queen St. It used to be white but the pinkish color it was repainted in really showed up on this overcast day. The church has an interesting history and still holds one service a year in French.

History of the Huguenot Church: In April of 1680 the ship Richmond arrived in Charleston with 45 French Protestants (Huguenots) aboard. More refugees followed, and in 1687, a church was built on what is now the corner of Church St. and Queen St. in downtown Charleston. About four hundred and fifty Huguenots had settled in the Low Country of South Carolina by 1700.

The original church was destroyed in 1796 in an attempt to stop the spread of a fire, which had burned much of the surrounding area. The replacement for the original building was completed in 1800 and dismantled in 1844 to make way for the present Gothic Revival edifice, designed by Edward Brickell White and dedicated in 1845. The church was damaged by shellfire during the long bombardment of downtown in the War Between the States and was nearly demolished in the severe earthquake of 1886.

Edit to add this postcard from 1946. The church had been painted white for many years but apparently it is closer to the original color now. 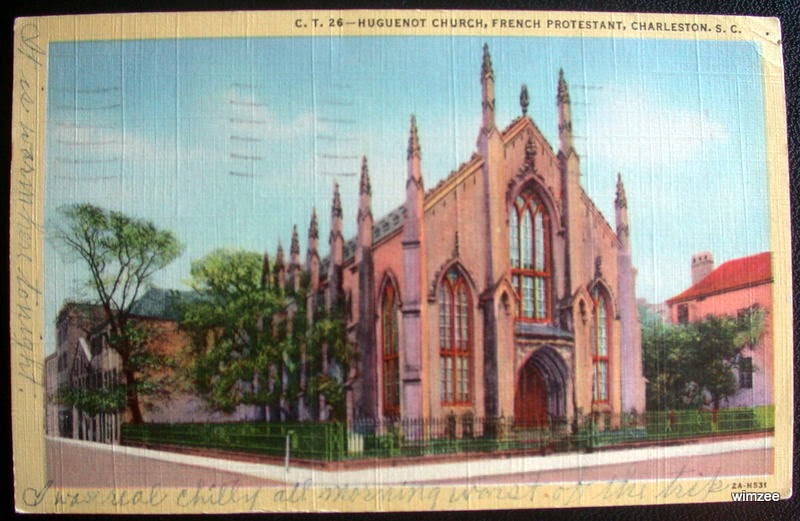 Short work week ahead, kids so something to be thankful already!
Posted by Charlestonjoan at 7:25 PM

It is very pretty!

Church St is one of my favorite spots! Love this picture :)

I always loved the simple elegance of this church's interior.

I love both the interior and exterior of this church. I believe it's the only Huguenot church in the United States.