Why did the Guinea Hen cross the road?

Sighting Charleston's merry band of guinea fowl always makes me happy. They were on a route, squawking and cackling and two started a squabble in the middle of South Battery which startled the tourists. They dodged in and out of yards along the way and were a noisy bunch. I backtracked to find this story from the 2013 Post & Courier:


Post & Courier; Edward M. Gilbreth;  April 10. 2013  - It’s been awhile since I mentioned downtown Charleston’s famous guinea fowl that amazingly and unbelievably flew in out of nowhere and landed on our doorstep a little over three years ago and have been hanging out in the neighborhood ever since.
They’ve become local celebrities and everybody loves them, even a couple of neighbors who were concerned that these completely out-of-context farm animals wandering around their porch, pecking hither and yon and leaving unwanted calling cards, might actually hinder the sale of their house.
Well, the house sat there forever and didn’t sell ... until prospective buyers saw the guineas. “Gus” and “Ginny” sealed the deal and now everybody’s happy.
The birds’ social antics are hilarious, and they are never seen outside each other’s company. Over the past three years, they have withstood innumerable close shaves with passing automobiles and attacks by a Northern harrier, a peregrine falcon, a red-shouldered hawk and what we think was a great horned owl during an insidious nighttime attack.
Last summer, Gus was bloodied up by the hawk and had a serious eye injury and a piercing talon wound to the neck. But he fought bravely to protect his hen and two young chicks, and, incredibly, the hawk retreated.
Bloody feathers were strewn all over the place, and we thought there was no way he could survive. But survive he did, with the help of Dr. Doug Berger, DVM, who captured the ailing bird and gave him a shot that seemed to jump-start recovery.
He’s completely back now, attitude and all, brazen enough to sit on an exposed perch at the end of each day and bugle sunset, with a note of defiance to boot.
“Bring it on!” he seems to be saying, with his chest puffed out and silhouetted against the sunset. It’s a thing of beauty.
Meanwhile, the two chicks, “Roberta” and “Fowler” (and aren’t you glad Roberta’s a hen? speaking of bad puns), are two of perhaps 50 hatchlings to make it to maturity without intervention. The long-suffering mother hen now has herself a closely knit family of four, and the rest of us have twice the entertainment. 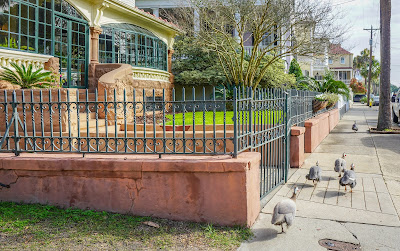 Posted by Charlestonjoan at 7:45 PM