While I breath, I hope

Sooner or later I find everything in the pavement and by this time I thought I had read the streets of Charleston thoroughly. It was a treat to find a new old phrase. Dum Spiro Spero is inscribed on the state seal of South Carolina: 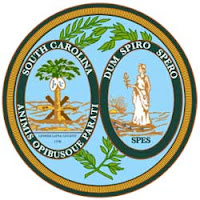 The state seal was the first of South Carolina's state symbols. It was first used in 1777, although it looked different then. At that time, it was two sided, and impressions of the two sides would be put into wax so they could be affixed onto documents. This proved difficult, so eventually the two sides were combined so that they fit next to each other on a one-sided seal, which is what we have now.


The left oval was originally the front of the seal, and it has the first of our two state mottos on it: "Animis Opibusque Parati," which is Latin for "Prepared in Mind and Resources." The picture is of a palmetto tree and represents a battle victory against the British at present-day Fort Moultrie during the Revolutionary War.

The right oval was originally the reverse side of the seal, and it has our second state motto: "Dum Spiro Spero," which is Latin for "While I Breathe, I Hope." The picture on this side of the seal ties in with the motto, because the woman pictured is the Roman goddess Spes, who was the goddess of hope.
Posted by Charlestonjoan at 10:32 PM