On the road - Oslo, Norway

The trip to Norway was billed as Norway in a Nutshell. Planning our trip during the hot and humid lowcountry summer, I was sold on the scenes of trains in gorgeous mountains and boat rides on the fjords and convinced my sister Shirley from Edmonton to join me. The trip is coordinated through Fjord Tours and can begin and end in different cities but usually include both Oslo and Bergen. In between you travel by trains, buses, and boats and space it out as you like with nights in different spots.

Sure enough I was sent a booklet of tickets and hoped for the best. The names of the towns and fjords are so complicated and unfamiliar that none of it seemed real until we were there to figure it out. Some of the connections were so close it was hard to believe it would all work, but it did! At times we would hop off a train on one track and flow with the group to get on an arriving train on the other side of the track. Everything ran very efficiently. One of my best moves was booking hotels a block or two from the train stations so that part was easy to manage.

We - my sister Shirley (from Edmonton) and I, started our journey in Oslo and had a couple of days to explore before boarding our first train. It was a vibrant, walk-able city with wide pedestrian boulevards.

We planned our day over the incredible breakfast buffet at the Thon Astoria. Waffles, herring, pickles, brown cheese (grew to love it!), the spread had something for everyone and kept us full most of the day. We looked forward to breakfast with daily awe! 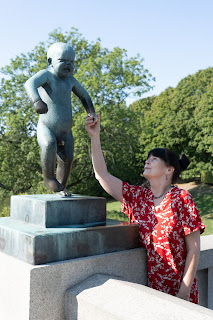 The angry baby statue is one of the best known pieces and visitors waited for their turn for photo ops with the screaming infant. Groups of students enjoyed playing the "pose like/with the statue" game and we couldn't resist joining the fun.

We toured the Norwegian Folk Museum, which is huge and pleasantly took up much of the day and made it to the Viking Ship museum which turned out to be right next door.

The Folk Museum had model village and farm buildings but I had my eye out for the Stave Church reconstructed based on the Gol Stave church from 1157 - 1216. Wow. 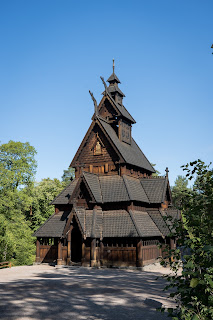 Shirley and I are both tea drinkers or "te" drinkers and were happy to see it served everywhere and freely available in hotel lobbies, but yikes, the tea in Oslo is served hotter than I've ever had it anywhere and had to remind myself not to burn my lips each time. Everyone had a Nespresso machine for coffee and hot water and every place had a waffle machine for emergency on-the-fly waffles! It didn't seem possible to have too many waffles and I came home determined to buy a waffle machine.

We spent the evenings walking and walking, exploring the waterfront and the opera house and worked my step counter over time every day. The next day we figured out the tram system and went to the Ekebergparken sculpture park which had trails through a park with surprise art and statues along the way. The young man selling tickets also offered coffee, tea and cooked up more waffles behind his counter and cheerfully said since we couldn't buy a return tram ticket on that end, we'd need to hope we didn't get caught. We didn't :). We found the most wonderful restaurant on the top of the hill and enjoyed a late lunch of mussels over looking the city.

In the evening we hiked up to explore the cemetery - you know I had to. I found the tombs of playwright Henrik Ibsen and artist Edvard Munch (The Scream). Shirley enjoys music and theater and was on the look out for what might be playing. We passed a re-purposed Jewish temple and bought tickets for an evening of Gypsy music which turned out to be an awesome end to the day. We went to our beds, snuggling under individual white duvets and smiled thinking of the breakfast buffet.

Posted by Charlestonjoan at 9:16 PM