I didn't actually eat at the H & R Sweet Shop because my walks are normally timed for when most businesses are closed. That trick has saved me a lot of money through the years but I wouldn't mind returning to eat one of their burgers and enjoy the ambiance. There is a fun write up in the Moultrie News from 2017:


The "H" stands for Harriet and the "R" is for Raliegh "Pat" Johnson, Sr. In 1947 Raliegh Johnson was discharged from the army and returned to Mount Pleasant where his father, Peter Johnson, owned a strip of land on the north side of Royall starting at Morrison and extending to the playground. Peter Johnson, Sr., bought the property from the school district for $150 in 1903. The Inflation calculator indicates that $150 in 1903 equates to $1,574 today. However, that amount of money was quite an investment in those days. In 109 years the property has not been out of family hands.Years ago the Sweet Shop brought in jazz performers to entertain patrons in the club room in the rear. "Oscar and Fabian Rivers brought their Chicago-based band to Charleston," says Raliegh, and they performed here. Also performing were Nita Nelson with Donald Fields on drums, with Jack McDuff and Joy Pryor. All of this occurred when jazz was practically dead in this part of the country.Raliegh Senior's brother Peter started the P.S. Johnson Funeral Home, now called Johnson and Hall, located on Venning Street. Together, the Johnson brothers were successful entrepreneurs in the area, and they were instrumental in the rebuilding of nearby Friendship A.M.E. Church. The Quaker Church of Philadelphia had operated a mission and a freedman's school on this land during Reconstruction. As years progressed, parcels of land were sold off to families who could afford it. The Johnsons have jealously guarded their inheritance and it appears that the H & R Sweet Shop and Major's Hats and Suit business is on track to see its 100th anniversary.Raliegh, Sr., was both a cook and a barber in the U.S. Army. In 1947 he engaged a contractor to build the block and stucco building that you see today. On one side, Raliegh operated a barbershop and on the other, a full-service ice cream shop and diner. For a while Raliegh was the only licensed barber in Mount Pleasant. In the 1960s before desegregation, the Sweet Shop was a beehive of activity for the African-American community, and Raliegh was known to help a lot of people out when they got into a jam, financially. 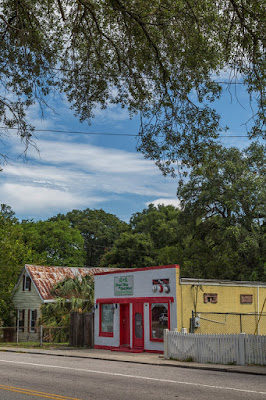 Posted by Charlestonjoan at 9:25 PM