When we pulled into the park to see the Indian Mound at Fort Watson across the bridge from Santee, the first thing I noticed was a small mound of dirt piled to display the historical plaques and I was NOT impressed. What the heck? Happily beyond the trees and field I spotted actual stairs built to climb a very impressive mound over looking Lake Marion.

The interesting thing about this particular mound is that it was used for numerous burials over time and grew higher and higher with the burial of different chiefs of the Santee Indian tribe between 1200 - 1500.

During the Revolutionary War, the British took advantage of the elevation and built Fort Jackson on top adding 30 - 50 feet in height to the mound. Our hero Francis Marion captured the fort by building a tower even higher in the woods in the dead of night and dealing with them from above. It is a beautiful and historic spot, peaceful, lush and green now with no evidence of the Fort.


Santee Indian Mound was part of a mound village complex; it was probably a burial and/or temple mound, likely constructed in some cultural period between 1200-1500 AD. Santee Indian Mound and a probable low earthwork remain intact except for the superposition of eighteenth- century fortifications on top of the mound. The fortification, British Revolutionary War post Fort Watson, was built from 30 to 50 feet high atop the mound. In 1780, Francis Marion and Light Horse Harry Lee decided to capture the fort. Bombardment was out of the question, for the Americans were without artillery, but Colonel Maham, one of Marion’s officers, proposed building a log tower higher than Fort Watson. Hidden by trees, men hewed logs and the tower was erected in a single night. At dawn a shower of lead poured down into the enemy enclosure, effecting a quick victory. Fort Watson was the first fortified British military outpost in South Carolina recaptured by patriot forces after the British occupation of 1780. There are no remains of Fort Watson on the site. Listed in the National Register July 29, 1969. 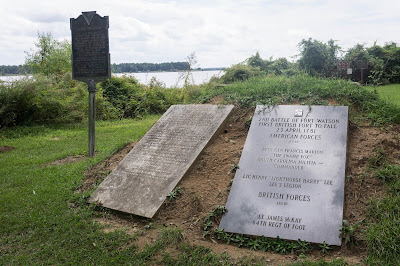 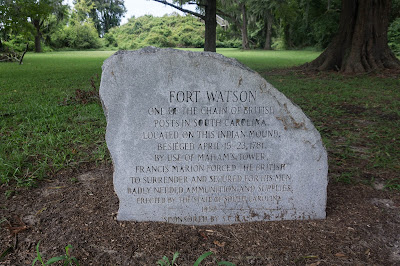 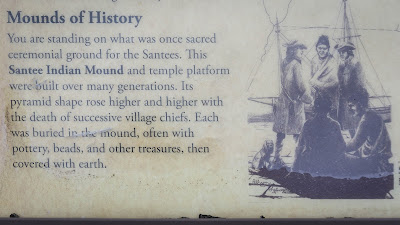 Posted by Charlestonjoan at 4:03 PM