I was on the road this weekend and a bit worried about it considering all the ominous traffic warnings as folks head to eclipse viewing territory. We aimed for Brunswick, St. Simon's and Jekyll Island on the coast of Georgia. It was all new territory for me so I was in my glory. I never tire of seeing new sights.

This Sunday's Church Photo in Lieu of Attendance is the sweet Faith Chapel on Jekyll Island.


Jekyll Island is a small barrier island on the southeast coast of Georgia. It was purchased in 1886 by a group of wealthy industrialists (including J.P. Morgan, William K. Vanderbilt, William Rockefeller, and Marshall Field) and developed into the Jekyll Island Club, a private winter retreat. A clubhouse was completed in 1888, and members built 'cottages' the size of mansions nearby. With all the growth on the island, the members needed a place to worship. A chapel was built, but quickly outgrown; Faith Chapel was completed in time for the 1904 resort season.The chapel's Gothic-influenced design, exterior gargoyles, luxurious carpeting, and rich stained wood interior are enough to impress. But the west wall, on the chapel's front, features a rare treasure. The stained glass window on this wall was designed, installed, and signed by Louis Comfort Tiffany, reportedly one of only five such pieces known to exist.

Luckily we found smooth sailing all the way with no traffic issues at all. We met with friends, had lunch on Jekyll Island, dinner on Brunswick Island and had a lovely water front walk along St. Simon's. 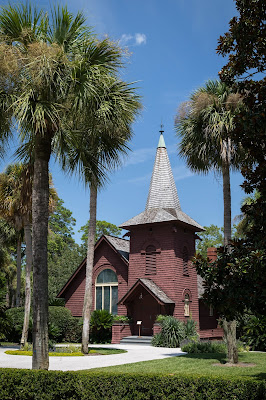 Posted by Charlestonjoan at 4:29 PM

Email ThisBlogThis!Share to TwitterShare to FacebookShare to Pinterest
Labels: Church, church photo in lieu of attendance, Georgia, Jekyll Island, On the road