Not too far from Georgetown and well worth a detour on historic Plantersville Road is this dramatic chapel ruin. The gate was locked so I didn't go any further. I almost crawled through the hole in the fencing that has clearly been used before, but I didn't, okay. Happy now?


Prince Frederick’s Episcopal Church: Begun in 1859 and completed in 1876, Prince Frederick’s Chapel played a vital role in the religious life of the Pee Dee settlers in the latter half of the 19th century. With the decline of the rice economy, parishioners migrated to the more densely populated urban areas and the church suffered from lack of maintenance. The ruins of the chapel are all that remain of what once was a striking example of Gothic Revival architecture in South Carolina 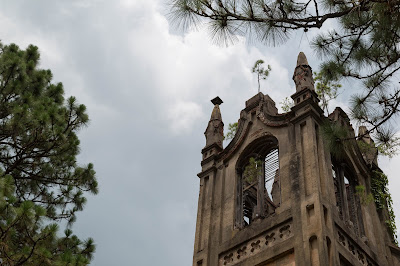 Posted by Charlestonjoan at 9:21 PM

What is that on the top of the left hand point on the steeple?

A shame it's fallen into ruin.

Good catch but I don't know. I keep looking at it trying to figure it out.
Would you consider putting a name on your comments?

It is. Supposedly haunted as well. Boo!

Hmm perhaps these terms have been re-used but I would hazard that a pillar is a supporting piece of architecture, a Spire is a decorative element on the top of a Gothic structure (aspire-- reaching to the top ) and the Pinnacle elements at the tippy top are just that and well perchaps the decorative Pinnacle upon closer inspection is a religous symbol! Class dimissed. LOL

Or perhaps it is a Finial. The internet allows access to public records from your easy chair. The tax collector should reveal the owner of the property that is down on its heels -- if it is a church perhaps the county is not even collecting tax revenue from the parcel-- it is a cool image worthy of reproducing and puting on a tee shirt to sell.
Tag line Got Goth? or This is Gothic , Man LOL

Even that vintage photo appears to be just the façade. It looks like a round type decorative object on the top. I like the Got Goth!

I believe you are correct.