Sometimes I come across something so significant that I feel almost ashamed that I had no real awareness of it before that moment. That is how I felt learning about the black Tuskegee Airmen military aviators in World War II. This picture has been on my camera for a few months and I finally got around to uploading it and digging into a bit of the story. Wikipedia has a great article on the topic.

I wondered what the Walterboro connection was but, although named for their origins at Alabama’s Tuskegee Institute, the pilots of the famed 332nd Fighter Group completed final training in Walterboro, South Carolina at Walterboro Army Airfield so it made sense to put the memorial here.


The Tuskegee airmen were the first black servicemen to serve as military aviators in the U.S. armed forces, flying with distinction during World War II. Though subject to racial discrimination both at home and abroad, the 996 pilots and more than 15,000 ground personnel who served with the all-black units would be credited with some 15,500 combat sorties and earn over 150 Distinguished Flying Crosses for their achievements. The highly publicized successes of the Tuskegee Airmen helped pave the way for the eventual integration of the U.S. armed forces under President Harry Truman in 1948.

The 332nd’s reputation for aggressiveness in air combat was so widely-known that the Germans also had a nickname for them — Schwartze Vogelmenschen, or “Black Bird Men.” Seven of the famed Doolittle Raiders were also trained here and there was a compound for holding German prisoners of war, and it was also the site of the U.S. military’s largest camouflage school. 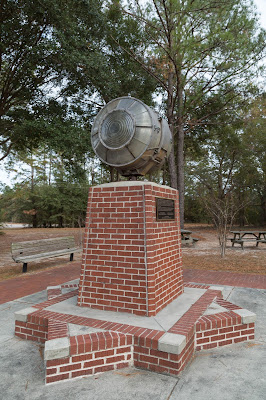 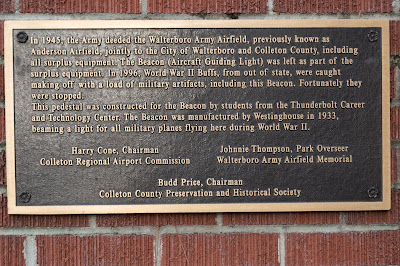 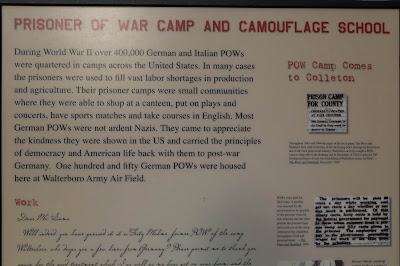 Posted by Charlestonjoan at 10:50 PM

I stopped in Walterboro as the confounded billboard touting the antique mall suckered us into town. Not a single shop keeper mentioned this chapter of town history. One shop had a really really bad roof leak in the public restroom area, I hope they fixed it by now. I have also been to Tuskeegee and while searching for a museum we drove on campus of TI and we were the only non Africian Americans there. You knew the students knew we were lost. Found the post office and waited in line to buy stamps for a post card. The clerk gave us directions to the museum and well by this time we merely drove by it and could not understand --there it was practically right under our nose --but we were somewhat misdirected by the signs.
Drove by the airfield. The Town is Just down the road from Auburn University.War Eagle.

I would enjoy seeing this place. The Airmen's story is extraordinary.

I've lived here for years and this is the first time I've actually followed the sign on the highway and explored it. I am glad I did.