One of Charleston's most beautifully renovated homes looks pretty as a picture gift wrapped for the holidays.


The Villa Margherita is an Italian Renaissance house at 4 South Battery, Charleston, South Carolina. It was built in 1892 and early 1893 for Andrew Simonds. The house is of brick with a Portland cement coating according to the plans by the architect, Frederick P. Dinkelberg. The decorative work on the four Corinthian columns and frieze on the front was executed by Morrison Brothers of New York City. The entrance of the house features a large atrium with a fountain.[1]Between 1905 and 1953, the house served as a hotel. During that use, guests included William Howard Taft, Grover Cleveland, andTheodore Roosevelt.[2] Sinclair Lewis was a guest at the hotel, where he completed the manuscript for Main Street.[3] From 1943 to 1946, the United Seaman's Service leased the hotel and rented rooms to seamen and their families.[4] In 1961, James and Mary Wilson bought the house. Their daughter, Mary Wilson, sold it for $3 million to Stephen and Mary Hammond in September 2012.[5]

I love this no-man's land of a week between Christmas and New Years and I'd like to have a couple more please. No meetings, few phone calls, a chance to finish up projects for the year and get things ready for the next. I met friends at Sesame for their half price burger night on the way home. 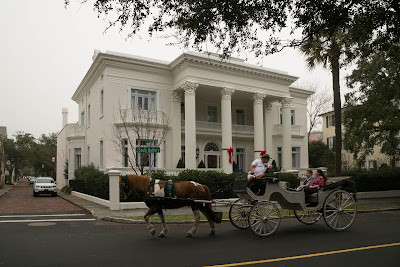 Posted by Charlestonjoan at 10:38 PM

What a beautiful place!

They did such a great job renovating. Wow.

It is and it has some history!

It is my shade of blue. You have a point.